Stand-up Comedy is a fairly new format of entertainment in India. Till now, I used to think everyone’s stint with stand-up comedy ended with their studies. The difference being that the comedy then is more tragic for the students, and now for the comedians.

All these comedians, who work day in and day out to make people laugh must learn something from a natural, my personal favourite – Arvind Kejriwal. No one is so consistent in making the distressed and troubled Aam Aadmi of this country laugh, by coming up with creative joke formats every other day!

For a man who received a great support from the people – educated middle class to be precise – and broke all political stereotypes to become the Chief Minister of the capital of the country, he could have shown a little more confidence, and self-assurance! But, he has been constantly wailing about how everyone, especially our “coward” and “psychopath” Prime Minister, is trying to get to him and his Aam Aadmi Party.

And this week’s video takes the cake.

It was just another attempt by Kejriwal to take potshots at the Modi government, in the typical Kejriwal style – by being both, the victim, and the hero! Victim because, just like Aam Aadmi, he is constantly on the receiving end of conspiracy created by the “centre”, and hero because probably he is the only one even capable, in whatever trivial ways, to take a stand against the tyrannical Modi government. 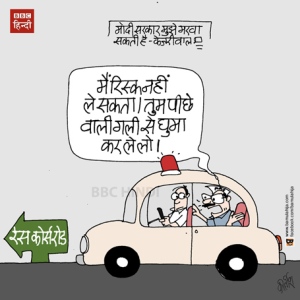 In this video address, Kejriwal had accused Prime Minister Narendra Modi of being “so frustrated that he can get me killed”. Woah, now that escalated quickly! Sometimes I wonder- Is Kejriwal just another insecure politician, or is there some method to his madness in launching tirades against Modi almost on a weekly basis?

I happened to see Madaari, the movie that had all the ingredients by be amazing but was still average, this week. Though I could hardly sit through the long, drab righteous lecture that it was turning out to be, one dialogue struck me. In essence what it meant was, when a normal person a.k.a. Aam Aadmi loses his son, he blames his destiny, but when an important politician loses his son, Aam aadmi loses his sense of security. Well, by this logic, Mr. Kejriwal ain’t playing his cards right. When someone you depend on to realise your demands himself doesn’t seem to have any power…well!

Talking about stand-up comedy and Madaari, we live in a time when professions that weren’t primarily meant for entertainment have all become national jokes, and films that were for entertainment are in serious troubles for serious issues, so that we become serious about the issues. For instance the legal system. Acquittal of Salman Khan by the Rajasthan High Court is funnier than the funniest joke cracked by the very funny Kejriwal. But alas, the joke is on us, when lots of bucks in the pocket can devalue the death of one black buck.

PS – Will someone please save Mr. Kejriwal from the very dangerous ‘Arhar Modi! Arhar Modi!’