Vietnam is probably on every travel-addict’s Dream Destination wish list, and I’m no exception. Well, you could replace Vietnam with almost any place in the world, and the statement would still hold true for me, but I was in Vietnam this month, and so Vietnam it is!

It was that kind of a trip where the destination doesn’t matter, because of the people you travel with! Well, actually it does. It needs to be inexpensive, because even after four years of practicing architecture, we are all still broke. And Vietnam was a wonderful place, “international” enough and did not burn a hole in our pocket! (Umm?)

So, after immense planning, adjusting, discussing, pushing, scheduling and re-scheduling, we finally landed in Ho Chi Mihn City to realize that we could have very well gone to Pune. Oh my! The number of bikes this city has is obnoxious, even by Indian standards!

If you know even a little about the Vietnam War history, I recommend you take a tour of the Củ Chi tunnels on the outskirts of Ho Chi Minh City and experience the underground guerrilla network for yourself. Crawling through the hot and narrow tunnels will give you a momentary sense of what conditions must have been like during conflict. What an experience!

We left the city setting to explore central Vietnam. From beaches, to lakes and rivers, from the very romantic Hoi An to the Imperial City of Hue, from a day full of water-sports at Nha Trang to a quick excursion through Hindu temples at Myson, the Vietnam vibe is contagious, and everywhere you look, it feels festive, almost like a celebration is on its way. What’s not to love? 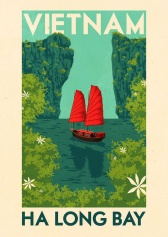 Generally, when people travel to a place with an unknown language, they tend to learn how to say “Thank You” (at least) locally. But when you are a vegetarian travelling anywhere outside India, you learn to say ‘No meat, No egg, No fish’ as well. In a country famous for its street food, local beer, coffee and “Pho”, Vietnam did not disappoint us vegetarians also. Though their local delicacy – Hot Pot – pretty much gave us an idea as to why Vietnamese people are so tiny!  It was even more evident when we went to their well-stocked night market, just to realize their largest size will fit only an Indian ant.

At first, when you enter this country, it pretty much feels like India. But only when you live and experience the place, you realize it is rather more developed, much more cleanly and with a better general civic sense. Post war, actual economic liberalization in Vietnam came in the mid-1990s and really got moving in the early 2000s. And India with its almost 70 years of independence still has a long way to go. I understand it is reasonably unfair to compare India to Vietnam- given the size, population and scale of everything, but we definitely have a benchmark to accomplish even before we look at the developed nations!

Well, when you are on a vacation with long-time friends, few of whom are planning to get married in the coming “wedding season”, there is a lot that happens, which cannot, should not and would not be told, and definitely not announced in the newspaper! Until next time Vietnam, cảm ơn!