Do you remember the time when as kids we would shut our ears, stick our tongue out and make weird sounds to signal that we have stopped listening to the other side, when in an argument? Well, blocking people on social media is exactly just that.

I remember the era when internet would take ages to connect with that peculiar voosh-voosh sound, and if and when it did, by the time it would even manage to open my email – which obviously had nothing urgent or important or mail – my time was up. Then with Orkut, it just sort of replaced our slam books and scrap books. With the overwhelming information that Google had to offer, it soon was sought out as more of an educational tool than a recreational one.

Internet had expanded our chance of having discussions, making informed opinions/decisions, but it also has given us the liberty of shutting the screen, switching off/or between tabs, and blocking anything or everything that challenges our views.

Internet was also a potential prospect of meeting with like-minded people. No, I am not talking about Tinder, d’uh! But, we become aware of other people who also are blocking the same things/views/people as us, and suddenly that gives a great power to our thought, ingrains it into us more than ever, and we block other views with renewed zest and enthusiasm. This is sort of leading to a “cult” culture over every opinion that we have.

So today it is very difficult to just say anything you feel like about any issue. Because the moment you open your mouth, you are either a bhakt, or an AAPtard, or just downright stupid. Either you are a feminist or a chauvinist. You become a libtard, right-winger, anti-national, intolerant or Pakistani even before you completely keep your point.  If you are against Trump, you are pro-Hillary. If you are against Hillary, you are pro-Trump. You are racist, body-shammer, islamophobic, or ….and if you aren’t one of these my-way-or-the-highway kind of peeps, then you are just ay!

This is now not only the story of the internet, but also in the outside-social-media life. The recent elections in America or Brexit has proved that we all are living a (judgmental) bubble of our own. But we forget that a bubble doesn’t even need something as sharp as a needle to burst, you know! And well, it has.

This change has been quite drastic, and rather too rapid for my liking. Of course, “change” has various connotations today, and I am not talking about the new prevalent – Do you have a change for 1000? – Kind of change. But, change must be such that it does not eliminate people or their ideas. Because this majoritarian attitude will only reduce our way of life to an idiot mechanism. As Shiv Visvanathan puts it – The change we need is a change in the idea of change itself.

Well, I am going to begin with not thinking that Indians who celebrated Thanksgiving have less IQ than the stuffed turkey on the table. Peace.

Amidst the smog-bound Delhi, and poll-bound America, Modi played a trump card that for sure has given a smog-like experience to all, even if not in Delhi – and don’t even ask me about the visibility status in Delhi. Forget visibility status, it has even fogged out the “status” in Delhi from Tu-jaanta-nahi-mera-baap-kaun-hai to Bhaisaab-ek-khoke-ka-chutta-milega. You can judge that from the very beloved and honest CM of Delhi Arvind Kejriwal’s tweet – “BJP will lynch everyone who speaks against their wrong doings.” – As a response to the fate of Rs.500 and Rs.1000 notes. The smog, for one, has definitely blurred Arvind Kejriwal’s vision. When the centre has taken a strong step in the direction of the only thing on their party’s mandate, Arvind Kejriwal is as if running to his mom and saying with welled up eyes – “But he cheaaaaated! That was my thing!!” I am not saying Arvind Kejriwal is dishonest, but every time he fights corruption, Mamata Banerjee’s nose grows an inch. 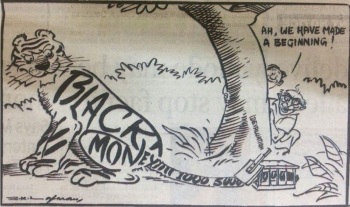 With a plethora of memes and messages on social media, the past couple of days have felt like a self-declared holiday! To me, it felt like a mass India’s Got Talent with the number of “hidden” jewels I didn’t even know existed around me. I mean kudos to all the people supporting the India-Against-Corruption movement against themselves! The great thing out of this whole fiasco, I mean of course other than the obvious ones, is that when padoswali Gupta Aunty tells you – “I know how much you had last night”, you can reply with a “So do I!” *wink*

On this note let’s observe one minute silence for all the aunties with huge kitty piggy banks in a constant state of poverty for their husbands. While we are at it, let’s also give a big shout-out to all teenagers, who are hooting for Modi. What do these innocent jackasses, living in their snapchat bubble, know about their fathers sweating over a bag full of money-turned-paper in the next room?  I won’t blame these children actually. I mean if an entire country could live in so much of a social media bubble that their president elect bewilders and shocks them all at the same time, then these tiny pouting creatures still haven’t grown brain-cells.

To my brain, the American election still feels like some kind of a social experiment – and it is just not gotten over! I mean I am still waiting for Cyrus Broacha to pop out from somewhere and say – Bakra!

Because this election has proved that no matter who is on top, the pervert parade is still larger in numbers, if not in IQ points. But I don’t blame the Americans. It’s like you are on a mission to lose weight – and you have to choose between not having fried food and not having sweets. I mean both are harmful, and have different ways of messing your goal up. The bottom line on choosing any one is – you are still heavy and now even a moron!

Well, anyway. I know that post the announcement by our PM, life is a struggle for quite a lot of us, but it is a short-term discomfort for a greater good in a long run. Just like not having that sweet AND that deep-fried potato! 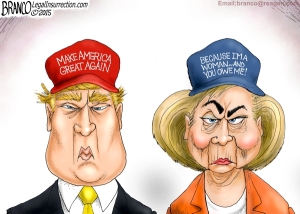 I have no idea why the never-ending America’s election is so big even here in India. Or is it because I am watching too many late night shows from America. Hey hey hey! Hold your horses’ guys. The late night shows there are more about making jokes, and not a joke itself! So anyway everyone is talking about the big day this week when America elects the first female president, or the first person, as Deepak Chopra puts it, whose consciousness is stuck in his first Chakra. (I suggest- go find out where it is located).

The possibility of a Donald Trump presidency is now listed as one of the ten top global “risks” by The Economist, somewhere between a Chinese economic meltdown and an oil price shock, and right next to the rising threat of terrorism. How can you not judge an entire nation when you read something like this? Firstly, how does one manage to be a global “risk” when your name is Donald. I mean don’t ruin my childhood for me, you!

The problem with most Americans is that they don’t love any of the two choices. How do you choose between someone who is under Federal Investigation for using a private email server and someone who has proposed about banning a religion, said women should be punished for having abortions, called immigrants rapists, lost a billion dollars in one year, had a fake foundation, was accused of committing sexual assault, caused violence in his rallies, bragged about not paying income tax, and not to mention about the “locker room” talks. I mean how should one choose when evidently none seems worse? I agree with you America, it is rather difficult!

The guy who seemed to have been the only one blowing his own trumpet about a year and half back seems like a legit winner today! Who would have thought? Imagine Donald Trump as the president though! I can totally see him do all diplomatic communication via his Twitter account- @CEOUSA. And just like his companies, he may invest big. If it works, its big returns as well. But if it doesn’t, then it’s going to be a completely different story.

The more I think about both the campaigns – Trump in the US of A and Modi here in India, I can draw a lot of parallels between them. If Trump comes in power, for one thing, they’d have a lot in common — both would be conservative, both suspicious of Muslims, both elected to power promising to work a miracle cure on unemployment and the economy, both banking on their leader’s charisma and fondness for showmanship and rhetoric to sell the seductive idea of “making America great again” or ushering in “achche din”. He even went ahead and used those golden words – Abki Baar Trump Sarkaar. Whoa, did we just elect a Trump back home, and are laughing at them? DID I VOTE FOR THE INDIAN DONALD TRUMP?! *faints*